It took about six years of planning and assessing the problem, two bond issues, hundreds of meetings and dealing with a myriad of details, but construction is finally ready to begin on Dickinson County’s new jail.

A ceremonial groundbreaking ceremony was held at 9 a.m. Thursday morning on the east side of the courthouse.

County Commissioners last year approved a total budget of $15 million to build a new jail and renovate the existing courthouse, built in 1956. Of that, $13.5 million will come from a bond issue approved by voters in August 2018. The rest will come from money the county already set aside from a two-mill levy created in 2013 to fund a building project.

The total project will include building a new jail and sheriff’s department east of the current courthouse and renovating the existing courthouse, making it more energy efficient, replacing outdated, failing systems and updating electrical and other systems for today’s usage.

A moderately-sized crowd attended a short program that preceded the ceremony where county officials were joined by other stakeholders involved in the project.

“This is an exciting day for Dickinson County,” said Commission Chairman Lynn Peterson. “If you think of it, county government is certainly more than just a building. We have dedicated elected officials, department heads and employees who provide a service and work with citizens in the county on a daily basis.”

County officials and others have long recognized the 63-year-old jail had issues, Peterson said. Not only were improvements needed, but also the facility itself needed to be updated to address changes in today’s society.

He noted the importance of preparing for the future, commenting that we all live in cities and town that we did not build, but “someone at some point had the vision to say we need to move forward.”

While it’s hard to find the perfect time and solution to address any problem, avoiding taking action is not the answer.

“While this project was recognized as a long time need, we thought it was very important for the county. That was something we didn’t take lightly as county commissioners. We went before the voters and had a successful vote the second time,” Peterson said. “So here we are today.”

Architect Larry Goldberg, president of Goldberg Group Architects, said it’s been a pleasure and a challenge to work on the jail. Alluding to the long process involved in bringing the project to fruition, he said, “I feel like we’ve been here forever and it’s a source of joy for us to see this finally coming to be.”

When the first bond issue failed, Goldberg said he watched the commissioners regroup and together they all found ways to cut costs using a “more efficient, more modest route.”

“This is our eighth or ninth justice project in Kansas. They’ve all represented a particular challenge, but the idea of actually renovating and adding onto a courthouse is particularly daunting because they’re such important symbols,” Goldberg said. “We respect that immensely.” 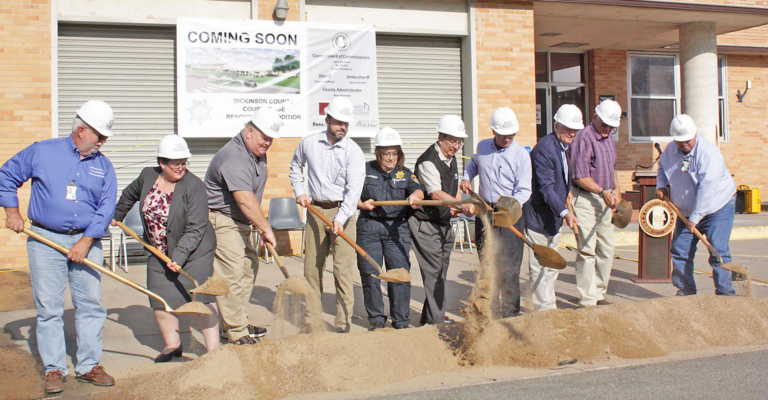