The steel frame for the new Socorro County Detention Center was recently constructed, giving residents their first glimpse of the layout and shape of the project.

Jails and prisons are a unique building type.  They differ from other buildings primarily because the occupants do not want to be there, and some will use any means at their disposal to escape, or at least damage the facility.  For this reason, construction materials, equipment and furnishings used in a detention facility must withstand intentional abuse and vandalism on a scale that most other structures will never experience.  As steel cells replaced masonry cells, in our detention facility designs, the coatings used on the cells came under scrutiny at Goldberg Group Architects.  Cell coatings not only determine how resistant a cell is to vandalism and abuse, but are critical considerations to long term maintenance.  Will the cell rust or support the growth of mold?

WHITEHALL TOWNSHIP, MI – A field surrounded by a fence topped with razor wire, a makeshift mobile classroom and a cramped waiting area at the old juvenile center are empty and silent.

Juvenile offenders ages 11-17 who once filled the building have been transferred to a new facility 13 miles to the south in Muskegon. The new multi-million-dollar facility, just one block away from the Muskegon County courthouse, is aimed at rehabilitating the offenders and reducing the likelihood they’ll have to be locked up again.

The old facility was effective as a lockup, with only one escape since 1996. From a treatment standpoint, too, it had its highlights — a full-court gymnasium and a commercial kitchen were among them. But the new space has nearly twice the capacity — with flex space to adjust based on dynamics of the population or scheduled activities.

“We have a lot more space flexibility, where kids can be put,” said Sandy Flower, a youth specialist at the Juvenile Transition Center.

The new building is also set up with separate wings to help staff keep rivals or adversaries separated from each other.

“We have much more capacity to evaluate and separate, which is a good thing,” said Youth Services Director Vernon Oard.

With the old Whitehall Township facility set to be sold at the end of the month, MLive Muskegon Chronicle decided to visit both facilities one more time and see the difference.

For full story and pictures visit:

Planners hone in on size and capacity of new jail

January 29, 2015 Criminal Justice, GGA in the News, Planning Comments Off on Planners hone in on size and capacity of new jail Goldberg Group Architects 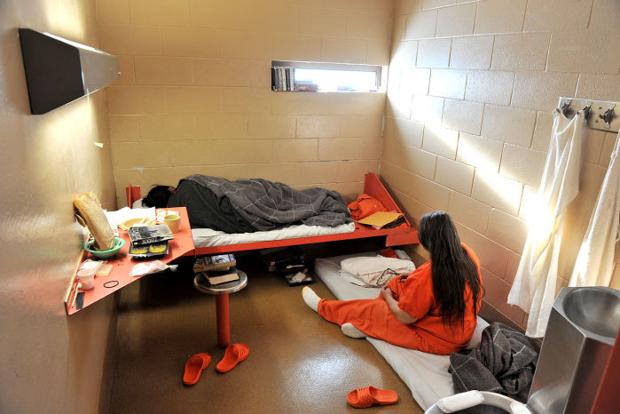 Inmates double-up in a detention room meant for one at the Lewis and Clark Detention Center.

The vision for what a new Lewis and Clark County detention center would look like is coming into greater focus with more detailed plans, although the design is not yet finalized.

Scott Cromwell, the principal architect with Slate Architecture, which won the county contract to design the facility, unveiled a revised plan for the building on Wednesday.

However, others who will provide services, such as for mental health programs and custodial services, have yet to comment on the preliminary design.

Jenny Kaleczyc, the regional deputy public defender for this area, attended the presentation at the Criminal Justice Coordinating Committee meeting and said the three rooms proposed for use by public defenders was not enough.

Overcrowding at the current facility is driving the discussion and planning for a new detention center. When the detention center opened in 1985, it had beds for 54 inmates, although it functioned best when not all were filled so there is room for each day’s arrests.

Additional beds were welded in place to increase the capacity to 70. Overflow inmates are being housed in contract jails in other counties at the rate of $65 a day.

The current design for the building, which would contain space for the sheriff’s office as well as administrative and other offices, proposes being able to initially house 252 inmates with room to add more “pods” inside the building that would increase the capacity to a total of 344. 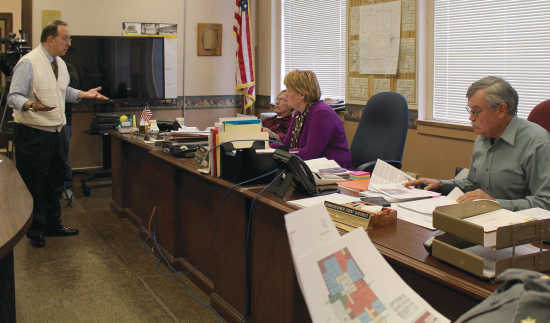 After Bourbon County Commissioners on Friday heard a summary of a community survey regarding the support of a jail project, Bourbon County Sheriff Bill Martin encouraged the commissioners move forward by contacting state legislators and signing an architectural contract.

December 17, 2014 All, GGA in the News Comments Off on Groundbreaking ceremony today for new Miami County jail Goldberg Group Architects

The new jail will be built on the parking lot south of the Miami County Administration Building.

Preliminary floor plans show three levels in about 44,000 square feet — a ground floor, first floor and second floor. The facility will include a sally port enclosed by a fence to give deputies a secure place to transfer inmates and suspects into and out of the jail.

Other features include an elevator leading straight to a tunnel, which will be used to transfer inmates from their second-floor holding cells across the street to the Miami County Courthouse for hearings.

The main detention area will be on the second floor and house 96 beds. Each cell will hold two inmates.

‘Hope for the future, not a place of punishment’: Muskegon juvenile transition center opened

October 11, 2014 All, Criminal Justice, GGA in the News Comments Off on ‘Hope for the future, not a place of punishment’: Muskegon juvenile transition center opened Goldberg Group Architects

The center’s Youth Services Director, Vernon Oard, said the new building would represent “hope for the future, not a place of punishment.”

“Young people who only sit and serve their time become hopeless and may act out,” Oard said. With more options for group and family treatment, “hopelessness will be replaced with hope that things will get better.”

“It won’t be about what’s wrong, but hopefully it’ll be about what we are going to do to make things right,” Oard said.

“I remember as a young patrol officer of the city of Muskegon, on many, many occasions, making that 14-mile trip up (U.S.) 31 to the old house,” he said. “And often wondering, ‘What sense did it make to run these young men and women up there, only to have to turn around the next day or two and try to get them back down here?'”

Mary Payne, who served on the citizen’s review committee that oversaw the jail planning, took a tour of the building.

“It looks as though it should serve the purpose very well,” she said, adding that it would only be possible to know for sure once the building begins to be used.

The new Muskegon County Jail, currently under construction, will have fewer locations where inmates are out of sight from guards.

The housing pods are open and the new jail will eliminate overcrowding, housing 540 inmates, 170 more than the current jail. Overcrowding can lead to altercations. Tuesday jail’s population was more than 30 inmates over capacity.

The pod design will also allow jail staff to better keep low and high risk inmates apart. The jail is expected to open next year.”

While Northeast Kansas will decide next week whether to retain a County Sales Tax for another five years, there’s one piece of good news for voters: their County Jail has collected Housing revenues from Wyandotte and Johnson Co., KS. and reduced the project’s Bond debt further to $530,000.  The original Project, completed in 2008, cost $3,072,000 but was paid down to $895,000 and re-financed after just four years.  At the current pace the Doniphan County Jail could be paid off in another three years for a total Term of 8 years, well ahead of the 10-year Term originally used for financing the project.  “It really works,” explains Artie Lucas, former Chairman of the Doniphan County Board when Goldberg Group Architects designed their County’s long-overdue, 48-Bed facility, “if you can get the Project budget, staffing & operations and available resources all to balance, you can have a very successful project – and Doniphan County has.”

The Jail That Gave Back

July 11, 2014 All, Criminal Justice, Financing Comments Off on The Jail That Gave Back Goldberg Group Architects